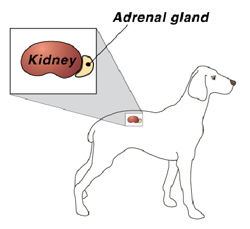 Identifying endocrine problems as early as possible is important in dogs and cats. These serious, potentially life-threatening conditions are more manageable when caught early, allowing us to begin proper treatment.

The endocrine system is made up of a group of tissues (mostly glands) that release hormones into the bloodstream. These hormones regulate metabolism, growth, development, and reproduction and are dispersed to different areas of the body, depending on the hormone’s function. When a hormonal balance is disturbed (by a tumour or autoimmune disease, for instance), an endocrine disorder can develop. “Hyper” refers to an excess of hormone, and “hypo” refers to a deficiency in a hormone. Treatment varies depending on the disease.

There are several common endocrine disorders found in dogs and cats:

Contact us if your pet begins panting excessively, develops any skin issues (such as hair loss or dull coat), or shows any changes in behaviour, energy levels, appetite, weight, water consumption, or urination.